In his 1990 book Jurassic Park, Michael Crichton introduces us to a renowned mathematician by the name of Ian Malcolm. Dr. Malcolm was a new breed of mathematician, partly defined by being openly interested in "how the real world works."
In the chapter entitled "MALCOLM", we find that these scholars were working in an emerging field they called "chaos theory", and, as Dr. Malcolm was on the plane traveling to Isla Nublar, he discussed this theory with Donald Gennaro.
While I thoroughly enjoyed the book, this segment captivated me. I have always liked math, and have a tendency to see how one concept applies and/or relates to another, and I just couldn't let go of what Dr. Malcolm was so clearly and powerfully laying out. While he was using his theory to prove why the Jurassic Park concept was going to fail spectacularly, I thought his theory was a phenomenal business principal. So I put it into a PowerPoint presentation, and actually presented it in one of our Universal Lending Corporation annual meetings to all of our employees.
Take a gander at this:

Dr. Malcolm believed that all complex systems (be that a family, a business, a government, shooting pool) had to strike a balance between the need for Order (or Stability), and the imperative for Change (or Innovation).
Order / Stability was necessary to keep the system from collapsing, but if that was all there was, would ultimately lead to extinction.
Change / Innovation was necessary to keep the system vibrant, but if that was all there was, interestingly it would also ultimately lead to extinction.
Therefore, to keep the system alive, to keep both sides of the pendulum in balance, there must needs be a place he called The Edge of Chaos. This was a zone of conflict and upheaval, where the old and the new were constantly at war. 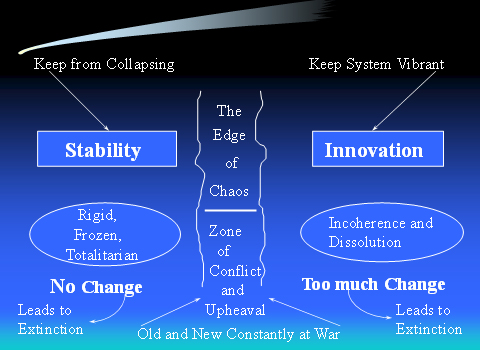 I, for one, believe that Dr. Malcolm / Michael Crichton, was right on.
Most of us don't really enjoy living in the edge of chaos, where there is constant conflict and upheaval. Rather, we would lean towards a place of calmness and serenity, where things are constant and predictable. In fact, when we find ourselves in a group where one of the members is unpredictable, the tendency is to move away from that person, and hunker down with the crowd.
Having studied this theory carefully, and not only looked at how it made so much sense getting "us" to where we are today, but also saw how this applies so well in a corporate environment, I embraced the Chaos Theory hook, line and sinker.
At the close of my annual meeting presentation to our employees, some of whom  seemed to thrive in the edge of chaos zone, and who many others looked upon with fear or disdain or criticism, I put this final slide up on the screen, and made the statement that this is where the breath of life will come from. 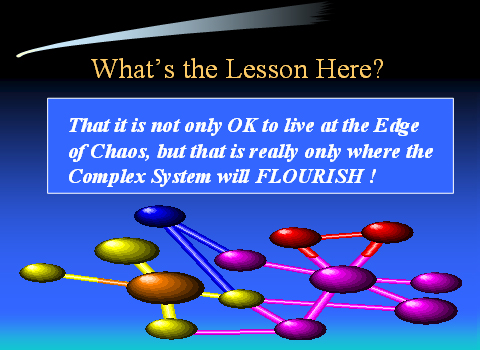