(How to go over obstacles.)

I had been through my first season of being the Division Director of NHRA's Northwest Division VI. It had been a steep learning curve, with lots of bumps and bruises, but an awesome lifetime experience working in a new land, with racers and Certification Team members and track operators, all working together to bring an exciting sport to competitors and audiences throughout the Pacific Northwest.

As the presiding official for my Division, which included Washington, Oregon, Idaho, Montana, Alaska, British Columbia, Alberta and Saskatchewan, I received many a phone call from racers and track operators asking questions about rules and procedures.

For technical questions like "What carburetor can I run on my '55 Chevy?" I sent off to my Division Tech Director, Jack Shannon. The operational rules and track operator questions were my responsibility, and there were a lot of them.

Many of them had to do with "How do I fill out the forms for getting event insurance?", or "How do I take care of reporting an accident?", etc.  Procedural issues that inquirers had no other place to go to get answers. 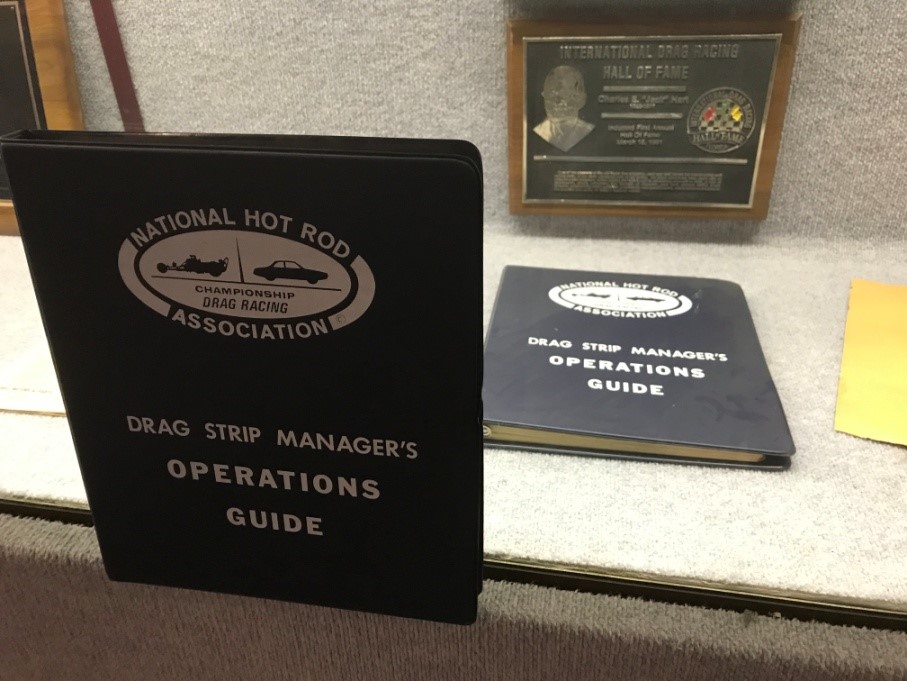 Bruce Bowler's original manual, standing along the manual inside the case at the NHRA Motorsports Museum.

Well, where's the manual, I thought. As a former mortgage banker, we had manuals up the ying yang to look up answers on FHA loans, VA loans, etc. The biggest problem was just keeping them updated from all the revisions that would come from the agencies.

There was none within the National Hot Rod Association. But it would sure be a help to the track operators, and drop my phone calls a bunch so I could do other things.

So I called my direct liaison with NHRA headquarters in southern California, Jack Hart, Executive Vice President. When I came on board, Jack took me under his arm and helped me in every aspect of what being a DD was all about, including how to set the final racing schedule using a slide rule. He was the greatest.

And I said to Jack: "Jack, we need a track operators manual so the track operators could have instructions and forms and guidelines available to them right at their fingertips."

And Jack promptly said: "No."

"Because," he said, "if we publish an operators manual and they don't follow it, it could possibly put NHRA in a compromised legal position."

"Really," I said. That didn't make a whole lot of sense to me, but Jack told me not to write that manual.

Well, the season was over, and the winter time was here, and I had some time on my hands (a really bad thing), so I went across the Columbia River to Portland, Oregon, and sat down with Al Beachell, who ran Portland International Raceway, and had taken pity on this new Division Director from Colorado and become my trusted friend.

He fully embraced the concept, and so I wrote the manual, with Al's contributions as a salty old track operator, and started putting the physical structure together.

I also felt that if this manual were to have a snowball's chance in hell of making it through the approval process, I'd better be able to have funding arranged so it wouldn't cost NHRA any money to produce and distribute.

So I contacted a few of the key players who provided goods and services to the drag strips, and asked if, for advertising in the manual, they would contribute a certain amount of funding to this project. Absolutely, every one of them responded, so I had them put their advertisement together so that I could get that printed and included with the printed manual, all in a nice neat package that I could present to certain key personnel in the NHRA at the upcoming 1970 Winternationals to be held near our company headquarters in Pomona, California.

The prototype of the Drag Strip Manager's OPERATIONS GUIDE got produced, and I could hardly wait to go to the Winternationals to present it to those whom I felt were the ones that needed to see this work, and pass on whether it would be a good thing to publish and get into the hands of the track operators.

With the turndown I got from Jack Hart, who would you present your prototype to for its initial review? Our legal counsel, of course. So it was that I met with Robert Gotlieb, NHRA's legal counsel, and asked if he would do me a favor and read this GUIDE, and tell me if he would approve it for distribution. He said he would read it that night, and get back to me in the morning.

When we met the next morning, the first thing he said was that he thought it was one of the finest pieces of work he had ever seen from a division director. Wow. OK, thank you, but are you okay with this manual being distributed to all the track operators throughout the U.S. and Canada?

"Absolutely," he said, "but you need to agree to make a few wording changes that I have put into your manuscript."

We went over them, and I said: "You got it!" I wanted him to sign off on it, but in true legal fashion, he declined, but said he would tell Wally Parks, the founder and President of NHRA, that he was good with distributing the Guide to the sanctioned tracks, and that was good enough for me.

So, Wally Parks then got the manual, and read it, and liked it, and actually signed off on it. So, I had Robert's okay, Wally's signature, Bernie Partridge's signature (he was the Southwest Division Director and "the voice" of NHRA, announcing all of their national events), and Al Beachell's and my signature. 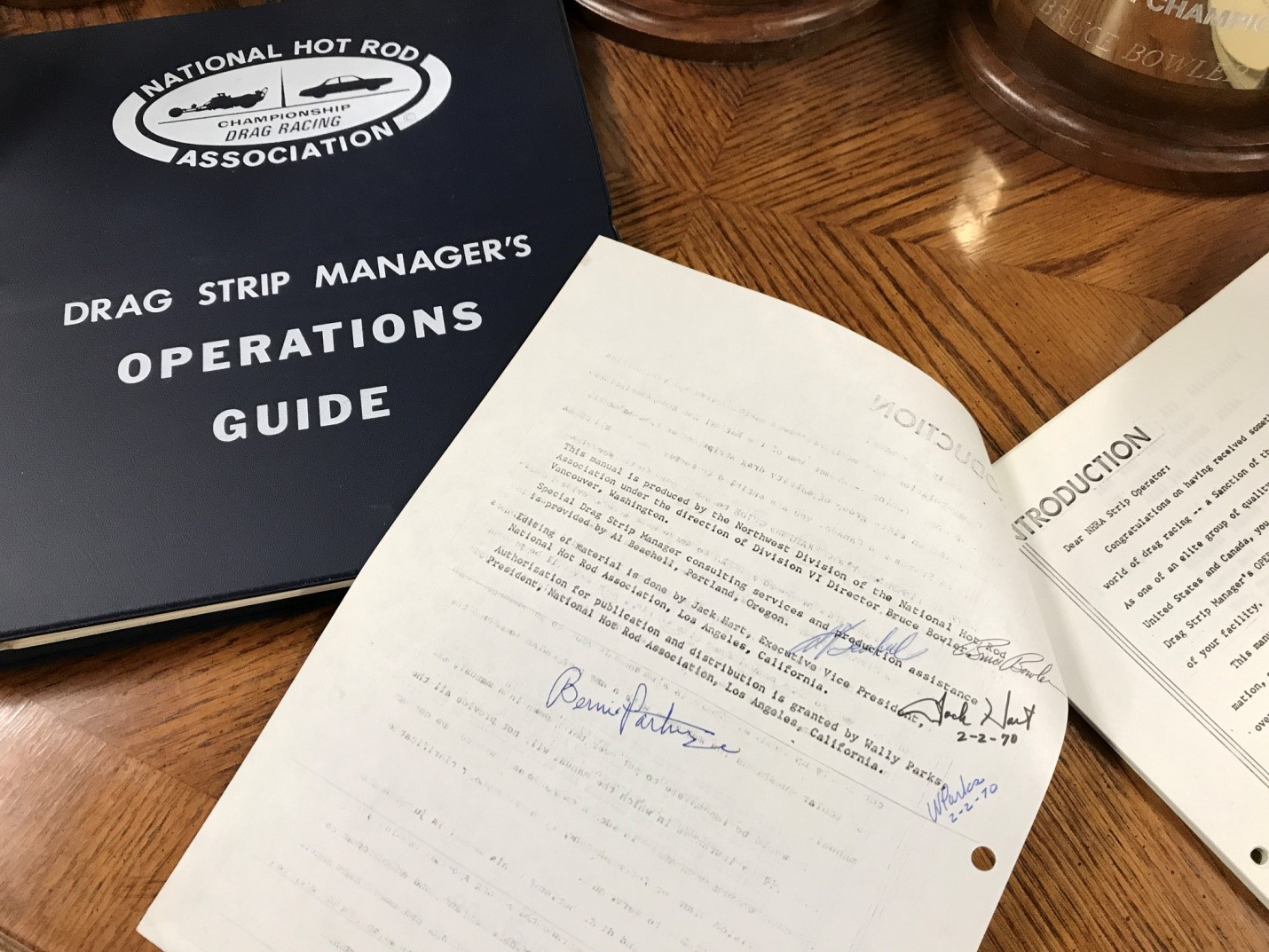 I went looking for Jack, with the signed prototype in hand.

I met with him up in the timing tower, and handed him the Guide.

He looked at the front cover, then opened it up, saw the signatures, and slowly raised his eyes and his head up to look at me, and with a slight smirk (smile?) on his face, said: "I taught you well, didn't I."
"You know how to go through the back door."

The rest is history.

One last comment:  In September, I was in southern California, and journeyed over to the NHRA Motorsports Museum to just look at the past, and reflect about the sport and what my participation had been in NHRA's history, and i found, in fitting place considering what Jack had put me through, there, just below "A Tribute To Jack Hart", sat "our" Drag Strip Manager's OPERATIONS GUIDE. 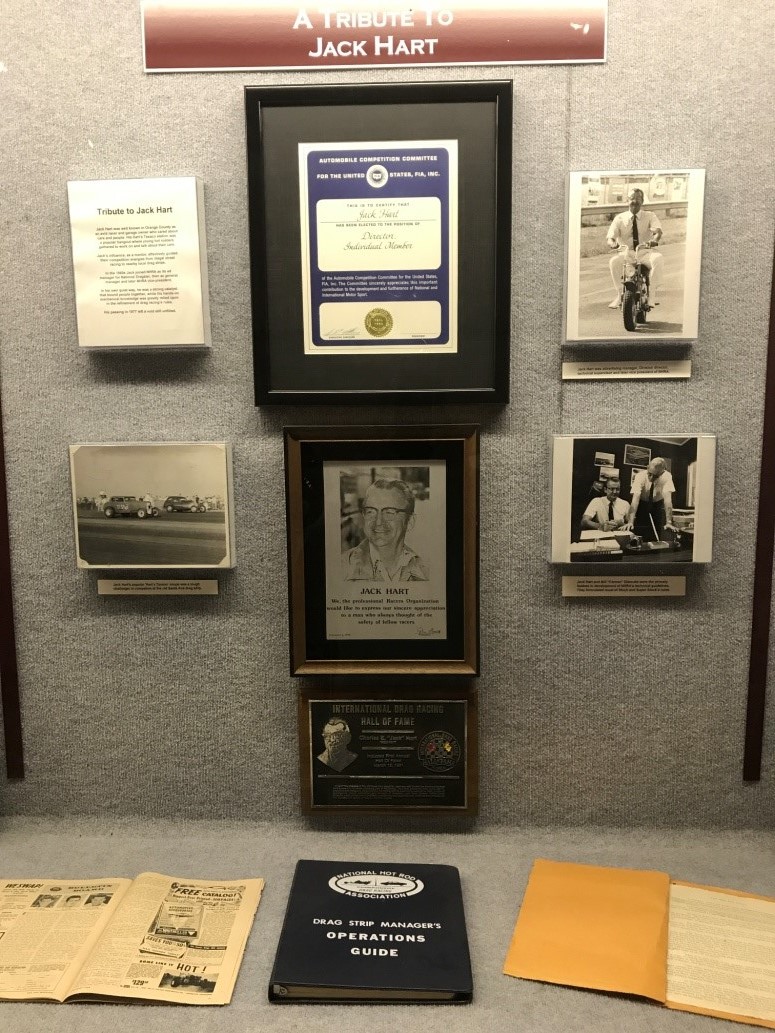 Thanks for your most excellent training, Mr. Hart. I truly miss you.